The Howe o’ the Mearns – Ancient History to Modern Times 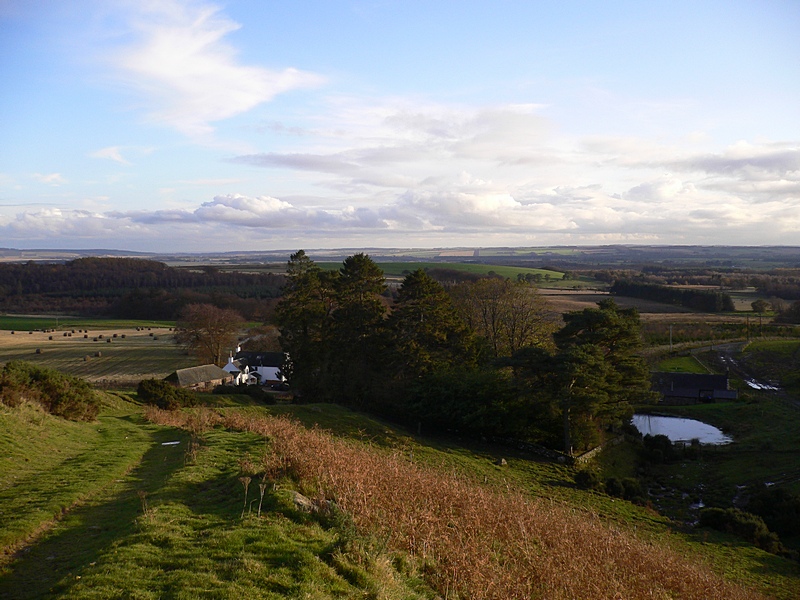 Laurencekirk was the main market town and although the livestock market has closed it remains at the heart of the Community.

The parishes of Laurencekirk, Aberluthnot (Marykirk), Fettercairn, Fordoun, Arbuthnott and Garvock lie partly or wholly in the Howe (wide valley).

Geologically the land is indeed ancient with the valley lying against the edge of the Grampian Mountains while its own original was as a seabed in an ancient landmass originating south of the equator to the west of Africa. To the south and east of the Howe lies the Garvock Hill, the remains of a volcanic ridge, separating the area from the North Sea.

When the last Ice Age passed around 9,000 years ago, the land was gradually reclaimed by its now ancient vegetation of trees and scrub land as well as the legendary Caledonian Forest. With the vegetation came its flora and fauna and eventually from Mainland Europe its human population.

Today the earliest remains of the early settlers are the burial chambers such as in Capo wood just to the North of the River Northesk. Here the first farmers settled on the free draining soils turning the first sod on the road to our present agribusinesses.

Stone, bronze and iron age settlements followed before the Romans set foot in AD 80, making camp at one point on the summit of Kair (a fort) Hill, near Fordoun.

Christianity only reached the Picts after Columba, Ninian and their missionaries arrived from Ireland. This celtic fororm soon produced native born priests, like St Drostan, Ternan and Palladius whose names continue to be linked to the area.

From a Pictish tribal kingdom we became part of the united Scotland under Kenneth MacAlpine.

Viking/Norse influences are also evident from some of the place names and occasional artefacts which have been recovered.

Being located on both the main land route to Aberdeen and via the Cairn o’ Mount to Deeside and beyond, there are numerous records of passage through the area by armies, Kings and visitors of all hues to the Mearns.

The Royal Castle of Kincardine with its deer park became an important stopping point on the Regal journeys around the Kingdom being developed by William the Lion.

Kincardine played a significant part in the Wars of Independence and it was here that John Balliol paid homage to Edward I of England as he dominated the political scene.

Conveth, the original name for Laurencekirk, is derived from one of two origins; a tax, in this case used to pay for the expenses of Royal Hunting parties or simply a place to retire to for food and entertainment after the hunt.

With the recruitment of Norman families by Scottish monarchs in the 12th Century these progressive Norsemen brought a new management team to the Mearns. Often marrying into local Scottish families, we soon had de Berekeley (Barclay), De Maleville (Melville), Ramsay (Norse for raven island), Wiscart (Wishart) and Oliphants (took the name Arbuthnot) assuming power from the previous Scots as they introduced the feudal system.

With the Normans came “modern “castles and fortified houses of stone rather than wood. Many have vanished or been replaced by more recent country houses. Balbegno, near Fettercairn, the best example of the old and perhaps Fasque House for sheer extravagance for the new upstairs downstairs look.

Not-so Ancient History of the Howe

Feudalism reigned supreme for almost eight hundred years and the foundations only began to shake once the agricultural revolution got underway.

In Scotland, we waited until the Jacobite Rebellions has passed and Royalists were no longer distracted by the politics of monarchy. At this point the Agricultural Revolution arrived in Kincardineshire.

Estates were now vying with one another to improve their lands for productivity and visually. The bogs and mosses of the valley were drained by squads of ditchers, burns were canalised, dykers were employed to enclose the fields with walls of turf or stone and new farm “toons” were built to replace the subsistence farming of the previous age. The scenery of today was created by sheer hard manual labour. No matter where you look today the countryside is a “designer” one.

If agriculture was the big change until 1850 then the railway was the sea change at that point.

Into a model Victorian scene came the model Victorian transport. From Marykirk to Laurencekirk, Fordoun Station, Drumlithie and even Carmont Station we were in direct touch with the outside world.

Until this time communities were largely self sufficient with goods made by local tradesmen and craftsmen. Now everything could come by train.

The population began to shrink from its peak of the 1840’s as local manufacturing and job opportunities declined. People headed for the cities and to the Worldwide British Empire.

A new balance was reached and by the time The “Great” War struck in 1914 we only had the benefits of electricity and the motor car to look forward to.

Despite the recession of the 1920s and 30s and the dire economic situation for farmers the community, with a steady flow of new faces from Aberdeenshire (proper), kept working hard and planning for success.

Farming was still the only major business and steady mechanisation saw a growth in machinery firms, mechanics and technology. This was accelerated by the importation of a disease called grass sickness which killed large numbers of work horses between the Wars and encouraged the farms to switch from their traditional power source to the tractor.

As the country emerged from World War II and a near starvation experience for the population, the government introduced a cheap food policy (rationing was still in force). Farmers were given government financial aid to improve and subsidise many of their enterprises. Research into the subjected was more heavily funded and farming became more productive and efficient.

But that is not the last chapter.

New History
We still have large farms producing a wide variety of products and they are very successful. However, the main player in our economic world is the fact that we are only thirty miles from Aberdeen, the centre of the European oil and gas industry.

We were baptised by the laying of nine oil and gas lines through the valley and then all went quiet until the workforce began to spread from Aberdeen and move back into our rural villages, vacant farm cottages and houses and especially attractive, to turn the old farm buildings into desirable country abodes.

It’s up to you where we go now.