Australian Couple on a quest to find their Mearns Roots

Rob and Linda Bruce from Melbourne have made their second visit to the Mearns within two years.

Linda (nee Adam) left Laurencekirk in March 1956 with her family for a new life in Australia. When her mother died she realised that her Scottish past was a bit of a mystery and with her husband they made the long journey home.

With the help of several local families she was soon building a picture of her family and their place in the community of Laurencekirk. Spurred on by this success they returned this year in an effort to fill more of the gaps in the story.

On Wednesday they visited Laurencekirk Cemetery to the family graves which they have recently restored and added the name of Linda’s mother, Helen Townsend Young.

Helen Young married Charlie Adam in July 1946 in the East Church, Laurencekirk. His family ran a garage at the Gardenston Hotel and she had met Charlie while waitressing at the hotel.

Local folk remember her as the bright and happy lass who sang as she filled up their cars with petrol.

Helen had grown up initially at West Powburn, Laurencekirk but sadly lost her mother when only 2 years old. Her father remarried and moved to farm West Mondynes. The family then consisted of her siblings John and Jemima and step-sister Rosalind. In addition, her youngest brother John was given up for possible adoption when her mother died.

Linda is now searching for her “lost” uncle through the Birthlink organisation.

Helen and Charlie had three more children after arriving in Australia; Robert, Stuart and Catherine. They had a wonderful extended family and loved life to the end. Helen’s ashes were returned to rest with her family in Laurencekirk.

The photo below shows Linda Bruce (right) and Helen’s niece, Jean MacKinnon (left) at Helen and her parent’s grave in Laurencekirk cemetery. 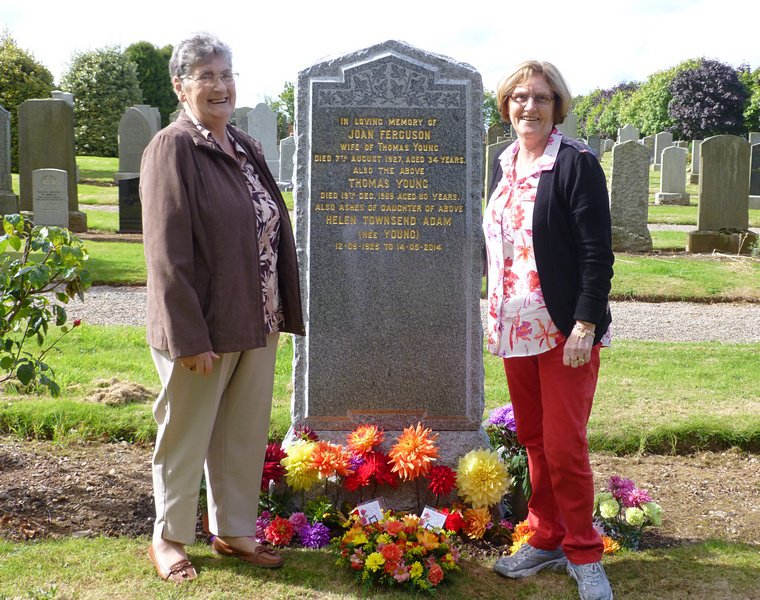