In the last meeting prior to the lockdown and constrictions placed on large gatherings due to the Coronavirus, members welcomed visitors from the Inner Wheel clubs of Montrose, Aberdeen St Fitticks, Arbroath, Brechin and Forfar.

The speaker was Graham Brown, a local farmer and son of one of our members – Christine Brown. A keen hill walker, Graham had undertaken a trip in 2018 to Guatemala, accompanied by members of the Forfar and District Hillwalking Club. Their purpose was to walk the Seven Volcanoes.

Guatemala in Central America borders with Mexico, Honduras, Belize and El Salvador. It lies on a very active plate boundary between the Caribbean and Cocos plates. The volcanoes mark the boundary with a series of active cone shaped volcanoes and calderas formed from previous eruptions. A caldera is a large cauldron-like hollow that forms shortly after the emptying of magma chamber/reservoir in a volcanic eruption.

Over its history Guatemala has been the subject of a number of territorial disputes with its neighbours, stemming in the large part from the absence of any definition of its borders prior to independence. In more densely populated regions along the borders there are fences to prevent illegal immigration. Areas close to Guatemalan borders experience high rates of crime. The Central American area, notably the Guatemalan border area, is listed as one of the world’s most dangerous places- “The murder capital of the world”.

However, tourism is growing in this area with Guatemala receiving almost two million visitors annually.

The expedition began at Antigua, accompanied by 3 guides, a driver and a group of 14 British people. The first climb of 2800 metres took them to the volcano of Pacaya.

The next climb was to Volcán Acatenango and Volcan de Fuego. The trail up the volcanoes had four distinct microclimates: the bottom and mid part being well vegetated, then they experienced trails of volcanic dust before reaching the summit which Graham said looked like a moonscape. This hike involved an overnight camp and early morning climb to the summit.

As the group moved from location to location some overnight stays in hotels were a welcome and refreshing break. 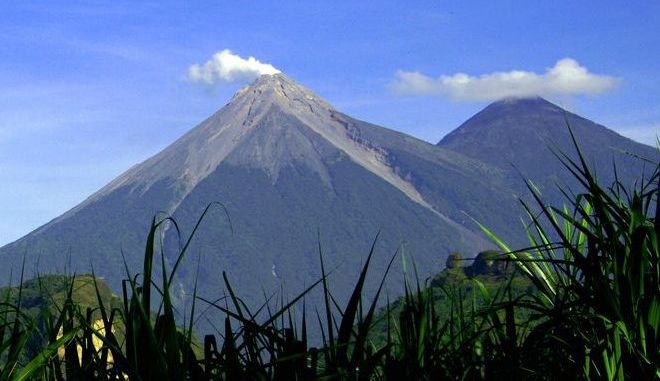 Throughout the talk Graham produced some wonderful photography, illustrating the beautiful scenery and panoramic views. Lake Atitlán in the Guatemalan Highlands provided the audience with spectacular views of this lake in the Sierra Madre mountain range. The lake basin is volcanic in origin, filling an enormous caldera formed by an eruption 84,000 years ago. Aldous Huxley famously wrote of it in his 1934 travel book Beyond the Mexique Bay: Lake Como, it seems to me, touches on the limit of permissibly picturesque, but Atitlán is Como with additional embellishments of several immense volcanoes. It really is too much of a good thing.”

There was an overnight stop for the trekkers before climbing Volcan Zunil. Their guide was able to inform them about the local flora and fauna as well as some ghost stories!! It was interesting for the group to observe all the small villages nestling in the hillside.

From the summit of the 3,770 metre Volcán Santa Maria the travellers were rewarded with spectacular views of Volcán Santiaguito. Connected to Santa Maria by a saddle, this active volcano is lower than its sister and they were treated to a bird’s eye view into its fiery crater and frequent eruptions.

Tajumulco was the next ascent attempted. It is the highest of Guatemala’s volcanoes at 4,219 metres with views that were described as breath taking. Graham said that heat and altitude presented most problems for the climbers. The group had a dawn ascent to the summit after an overnight camp and he described the sea of cloud below as being like the view from an aeroplane.

The final trip was to the peak of Volcán San Pedro, through lush cloud-forest, reaching the rocky outcrop of the summit at 3,020 metres.

The talk was very much enjoyed by the audience and a short question and answer session took place before President Frances Wallace gave the vote of thanks.

At the ensuing Business meeting President Frances thanked all who had contributed to their recent successful Charity Bazaar. Thanks, was also given to sponsorship from Macphie Glenbervie, Hamlyn’s Oatmeal and Kettle Produce, Fife. Also thanked were Laurencekirk and District Rotary Club. Details of the dispersal of monies will be forthcoming.

President Frances and Secretary Gladys Johnston had recently attended the District One Meeting in Aberdeen. Gladys was nominated and accepted as District Secretary. In District One there are 770 active members. £36,317 was raised for 28 National Charities and 131 local Charities. Inner Wheel Association had raised £40,000 for Riding for the Disabled. The meeting was also told about Handmade for Dementia – a volunteer group who knit cannula sleeves for dementia sufferers. These go in NHS Red Bags which accompany Dementia patients when they are admitted to hospital from care homes to keep their possessions together. Planning for the 100th Anniversary in 2024 has started. Some suggestions made to recognise the event include sponsoring or purchasing a lifeboat; Inner Wheel Rose; Garden Party and Great British Menu.

Monthly meetings have been cancelled until further notice. However, the Committee experimented and recently held a virtual meeting using the video conferencing tool Zoom. After initial problems it was deemed successful and a possibility for overcoming social distancing and ensuring that regular meetings and monthly coffee mornings could still continue.