In an effort to bring some form of “normality” to the club, a meeting was arranged for the time and date that the members would have usually been commencing the year 2020/21, albeit from the comfort of their own homes via Zoom and not at the usual venue of the Panmure Arms in Edzell. Although not an ideal situation, it was a successful venture and helped promote some continuity for the members.

Some 13 members logged on and were warmly welcomed by President Frances Wallace.

Also present was Rotary President Alan MacNaughton, who in the traditional manner outlined the plans that Rotary had for the year ahead.

Alan had spent his formative years as part of a farming family at Balquhidder in Stirling, attending school in Perthshire and graduating from Edinburgh University with a BSc Honours Degree in Animal Production Science in 1981.

His career then took him to FMC in Perth for 14 years before moving to Portlethen to work for MacIntosh Donald as a Sales Director in 1995 and being promoted to Managing Director in 2006, He retired from this post in April 2019.

Rotary have raised £35,000 in the last 5 years and it is hoped that despite the restrictions and problems raised by Covid 19, the message “Rotary opens Opportunities would still hold fast for the coming year.

Membership is a problem for the Rotary Club, but it is hoped that the club could build on the positive presence that they already had within the local community to encourage new members. The restructure of the format for their meetings with a blend of face to face and Zoom meeting is hoped to help here. Other strategies have begun also to identify individuals who could be approached to join. Their website is to be re-done with a link to RIBI, and a flyer distributed locally to attract new members.

Fundraising has also been greatly affected by Covid and plans are well underway to produce a calendar for 2021 as a fundraiser, with local sponsorship for each month.

The RYLA camp which is held annually has been postponed until Summer 2021 with the two proposed youth candidates hoping to go then. The Annual Shoebox Appeal is still going ahead, and it is proposed that the District gavel competition would still go ahead with teams of 4 meeting through Zoom. Regular events which Rotary usually host such as Partners Evening, Burns Supper, Duck Race, BBQ and Community Awards are still scheduled but subject to change because of Government guidelines.

President Frances thanked President Alan for his very thorough resume of the year ahead and agreed to support the membership problem by promoting Rotary and spreading news about all their achievements.

Relinquishing her post after 10 years as Laurencekirk and District International Service Organiser, is Margaret Maclean. She has regularly hosted afternoon tea “sew- ins” and organised the collection of an amazing 200 knitted blankets along with a collection of hats, bootees cardigans and tops during Lockdown. These have been sent to North East Scotland Support for Romania. The charity is hoping to transport their final load to Romania in March next year. 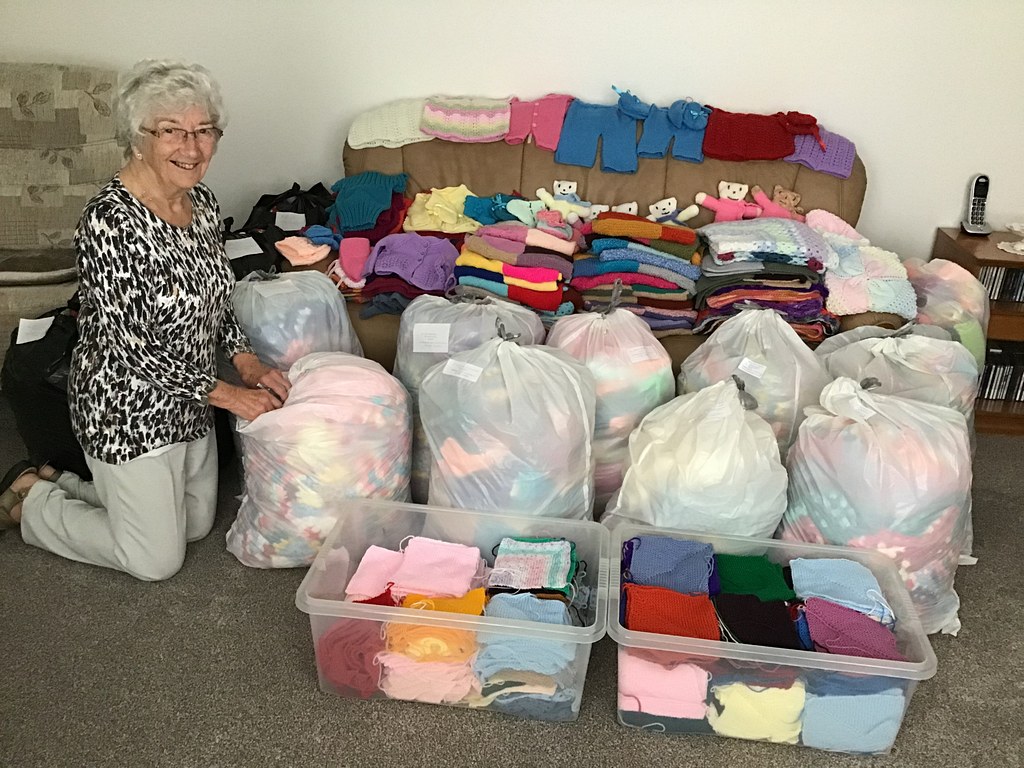 Margaret joined Dundee Club in 1982 but then moved South to Derby in1983. As a newcomer to the area her first Inner Wheel visitor was a great support and still visits Margaret in Laurencekirk.

Margaret is very self-effacing in all that she has done for Inner Wheel and has served as overseas Organiser both here and in Derby.

Derby club closed with some 30 members still on its roll and Margaret decided to join Ashbourne Inner Wheel. On one of her return visits to Ashbourne Club she met Rhona Hunt who had previously lived in Laurencekirk, returned to live in Ashbourne and joined the club that Margaret had left!!

Margaret recalls being asked by District to knit teddies and that it was a real joy to see literally hundreds of teddies at the District Meeting.

Another recollection for Inner Wheel Day of Service was a meeting for a soup and sweet lunch and being involved in cutting up stamps for hours in aid of charity. At this point she said that contact was certainly not by e-mail!!!!

Although not present at the Zoom Meeting, tribute to all her hard work was paid by President Frances and good wishes conveyed to her successor Marion Robson.