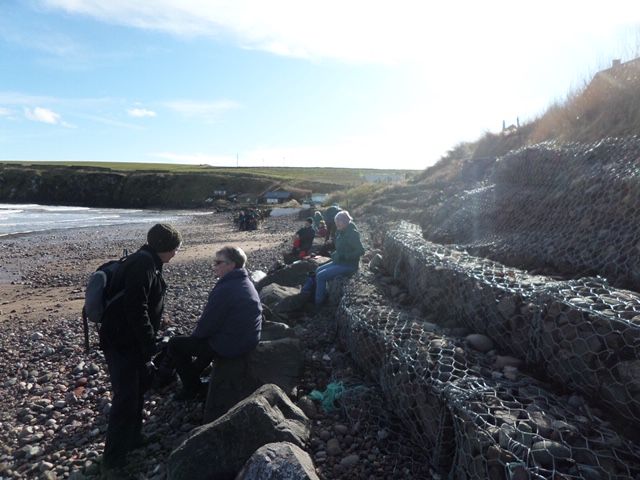 After sleet and snow showers the previous day, and our last walk being postponed, conditions of light breezes, light winds and sun provided excellent conditions for our recent circular walk at Lunan Bay.

A group of 19 members gathered in the car park at Lunan Bay, having successfully negotiated the pot holes on the road down past the Diner. The mini bus fund-raising committee were able to share the good news that sufficient money had been raised for the appeal and it was hoped that the new mini bus might be available for use for the group in June. Further details about this will be shared at the AGM which is to be held on the 17th March in the Masonic Hall Laurencekirk at 2pm.

After leaving the car park we headed past Lunan Home Farm and Lunan House, part of the Lunan Bay Stays Complex, before turning left. We noticed some pigs and a donkey as we made our way along the road. We then crossed the Lunan Water at Lunan Bridge and headed towards Red Castle on our left. 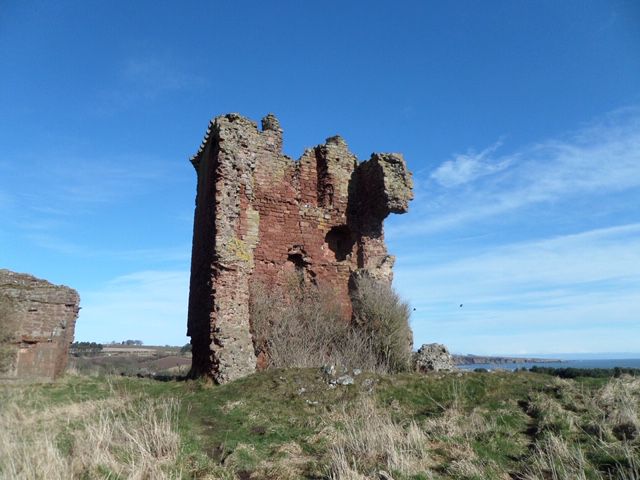 We climbed through a wooded path and passed by the castle. Pausing to admire the beautiful vista before heading down towards the beach we noticed two birds nesting in the ruins which were thought to be fulmars.

In 2016 local walkers and history buffs believed the long-decaying Red Castle, or Rubeum Castrum, was about to fall foul of a growing fissure below its foundations – a 100ft by 4ft crack. Thankfully this has not happened and we successfully manoeuvred the hill.

The castle was built overlooking Lunan Bay by King William the Lion, to stop invaders gaining a foothold on the strategic beach near Montrose. In 1579 James Gray was kicked out of the castle by his new wife Lady Elizabeth Beaton when it emerged, he was in love with her daughter. His subsequent two-year campaign of attacks on the castle ended its usefulness as a noble residence.

The waves were spectacular as we walked along the beach towards Corbie Knowe where we paused to have our lunch, many of us perched on the gabions which had been built to support the erosion. We also saw concrete blocks, the remains of the tank traps that once lined most of the bay to defend it against the possibility of sea-borne invasion. 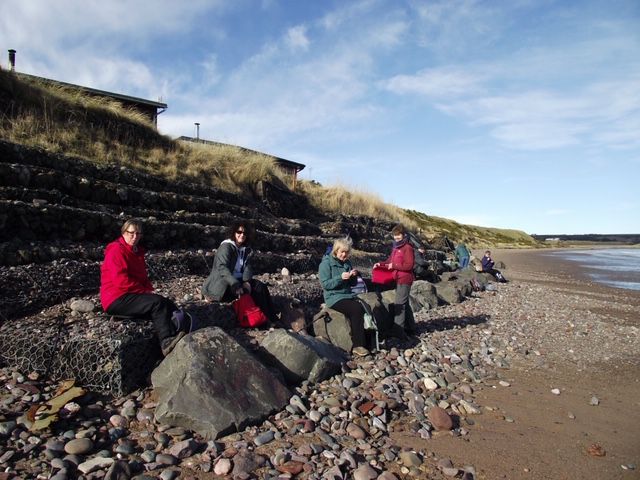 We were joined later by the six short walkers who had followed the thirteen long walkers. They later retraced their steps back to the car park.

Whilst leaving Corbie Knowe we met some surfers from Dundee University who were making good use of the conditions. From the hilltop path we could see along the coastline as far North as Inverbervie. This path took us to Ethie Haven, where there were a few suggestions made that we could haul ourselves back up to the hilltop via the rope, which would have been used by residents in the past. Unsurprisingly, no one was keen!! The gardeners in our group were keen to see the use of kelp for fertilisation in the raised beds.

From there we took the Angus Coastal Route, passing by North Mains of Ethie, trying to avoid the huge water filled potholes. A metal crest inset on the steading intrigued us. We wondered if the inscription- “Sans Tache”, 1848- which is the motto of the Napier clan and means “without stain “was an indication that this farm had been owned by the Napier family in 1848?

From the farm we walked down towards the ford at New Mill, spotting a heron. The water in the ford was extremely high, so we crossed very cautiously via the path, before making our way towards the junction of Newbarns Smithy and Newbarns Cottages where we turned right. Some workers were busy in polytunnels preparing for the new season of soft fruit.

The final part of the walk saw us making our way back towards the bridge over the Lunan Water and retracing our steps back to the carpark, having covered approximately six and a half miles. 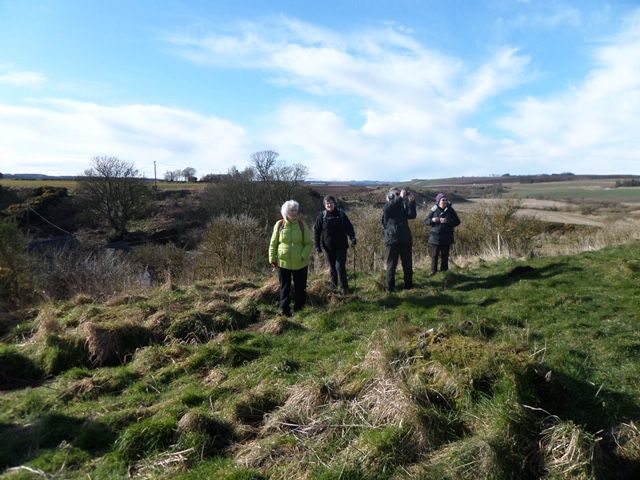 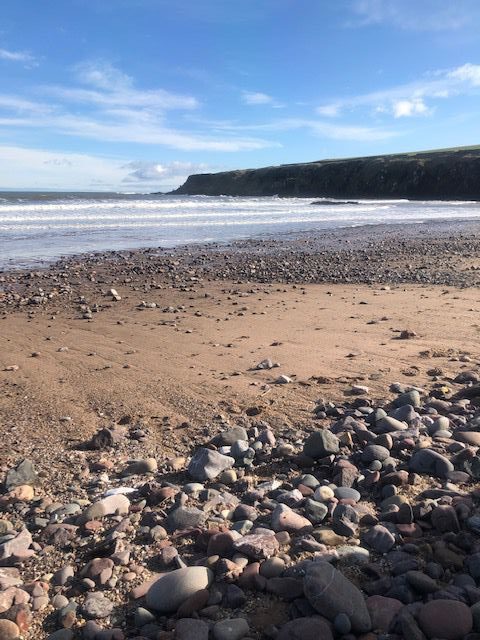 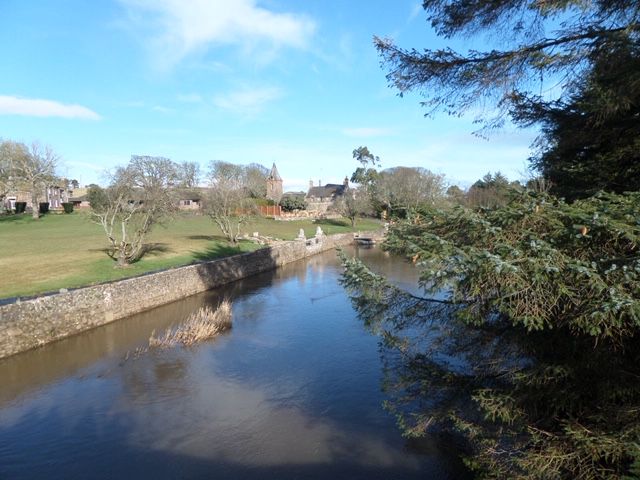 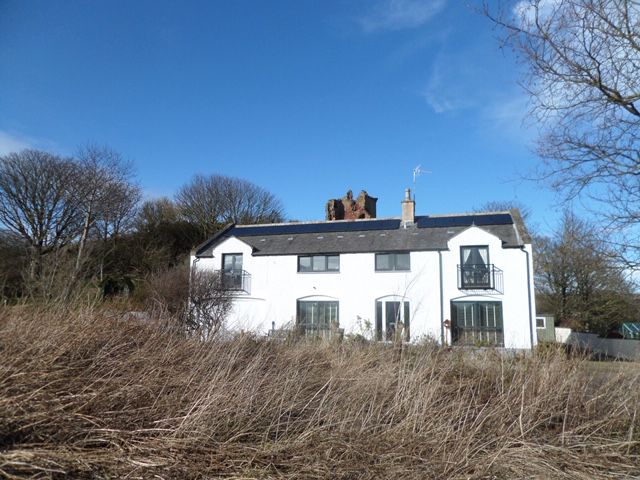