This, the fifth annual festival, started on Friday evening with the now well known “Oatmeal Dinner”. Jack Webster, an aficionado of Grassic Gibbon, gave a typically heartfelt address on “The Land”. On Saturday the Ballad Bus took the road to Fettercairn under the guidance of that well known artefact and sometime international athlete and ambassador for the parish.

Music and song were provided by Dennis Collie, Sandy Mather and Donald Clark while the whole company joined in a rendition of “Jeannie frae auld Fettercairn”. Touching a topical note but also a raw nerve for the residents, Marion Robson read “The Flood”, a poem written in 1979 by Jim Brown’s late father, also called Jim.

On Sunday and following a service in Arbuthnott Kirk, Frieda Morrison, broadcaster, journalist and folk singer was interviewed by Jim Brown before entertaining an enthusiastic audience, accompanied by Sarah Beattie, a brilliant local fiddler. 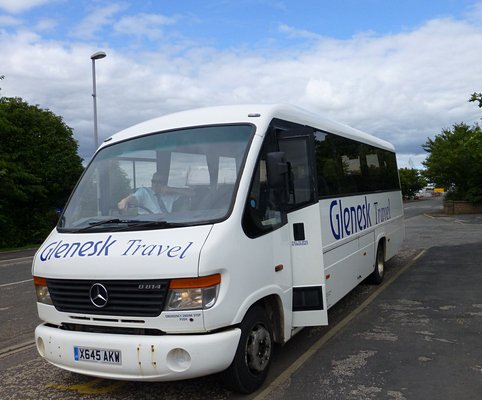 The “Ballad Bus” awaits its passengers.

Local events can be added to the calendar.