The recent walk from Arbroath to Auchmithie Harbour and back was well attended by some 18 members on a bracing January day. The “long walkers”, consisting of 7 members were led by “Red Lichtie”, Gladys Johnston. Credit for much of the historical and geographical facts provided on the way must be accorded to Gladys.

The walk began at the North end of Victoria Park past King’s Drive, following the Angus Coastal Path and along the Arbroath cliffs which offers great views of the surrounding area. The Victoria Park is a raised beach formed at the end of the last Ice Age when the ice melted and sea levels rose, but the land rose out of the sea even further due to the release from the weight of ice sheets. 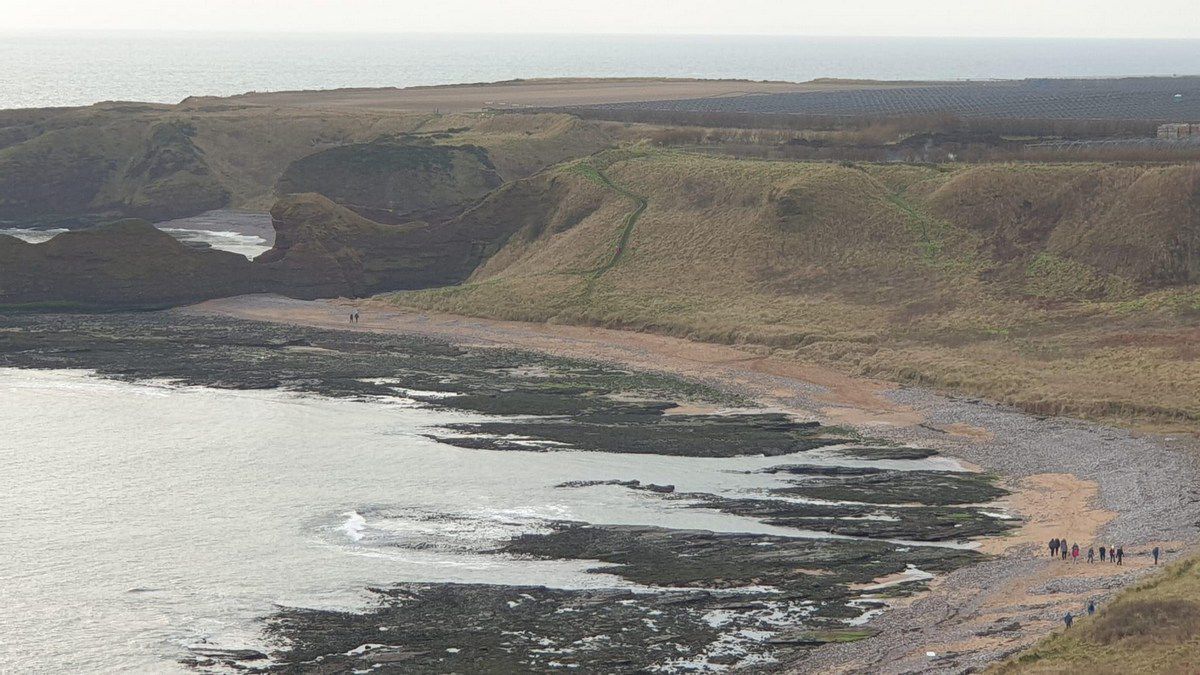 Gladys made the group aware of a number of distinctive features as they progressed along the path. The first to be seen was the Needle’s E’e – a natural arch and entrance to a collapsed cave some 10,000 years ago which was left high above the present sea level. After this there were two more blow holes which were formed when the roofs of caves collapsed allowing sea water to be forced upwards during high tides and storm conditions.

Gladys then pointed out Dickmont’s Den – a deep inlet or geo. This was formed by erosion along a fault line in the old red sandstone. Many geos have sea caves at their head. In the past this particular feature was associated with smuggling. Red and green lights were placed at the seaward entrance luring unwary ships to think that they had reached the harbour. This caused them to founder on the rocks, and provided the smugglers with an opportunity to plunder the cargo and stash it in nearby caves. The smugglers created a rumour that one of the caves at the head of the geo – known as “Piper’s Cave – was haunted by a piper to deter inquisitive locals. In reality, the eerie skirling which can be heard is the wind blowing through the caves.

Further north to the right the groups’ eyes were drawn to De’ils Heid a very distinctive red stone stack in Carlingheugh Bay (or the Flairs as it is known locally). The Flairs are guarded to the South by some more cliffs – the Seven Sisters and the Castle Arch. 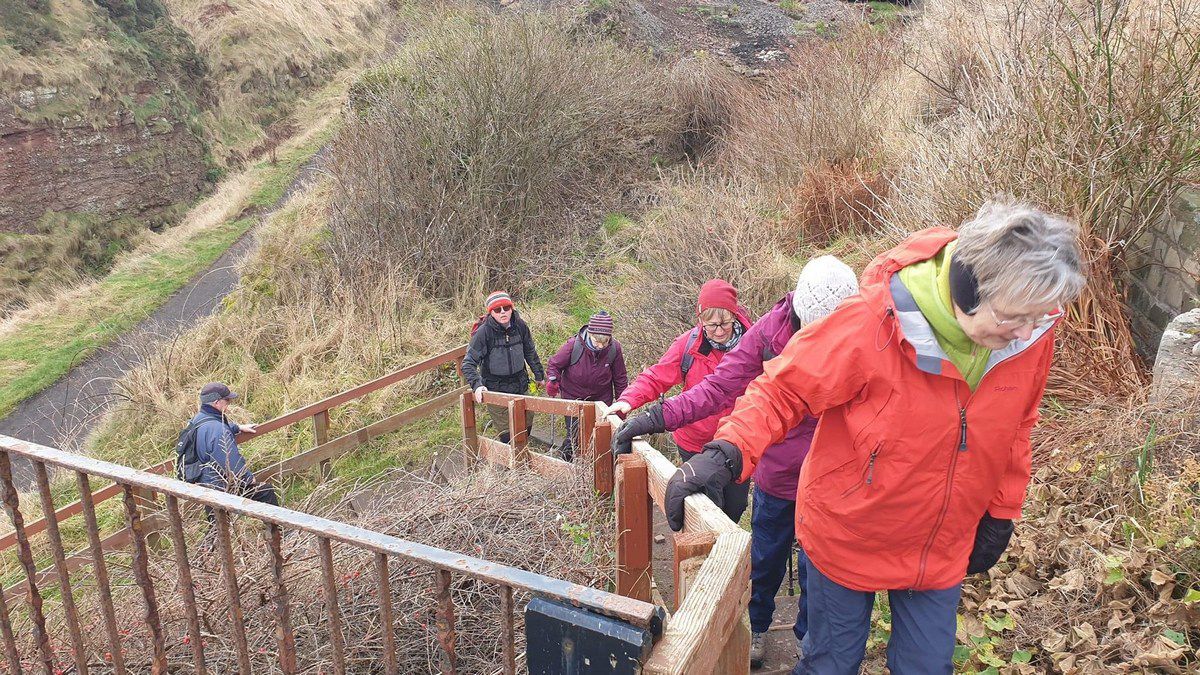 Due to instability of the cliff face at Seaton Den, the group descended a flight of irregular steps to the pebble beach before puffing their way up back up a longer flight at the North end!! Their reward was some beautiful views looking back towards the Flairs. At the top of the steps to the Flairs there was a metal installation of musical notation which represented “The Lord of the Dance”. 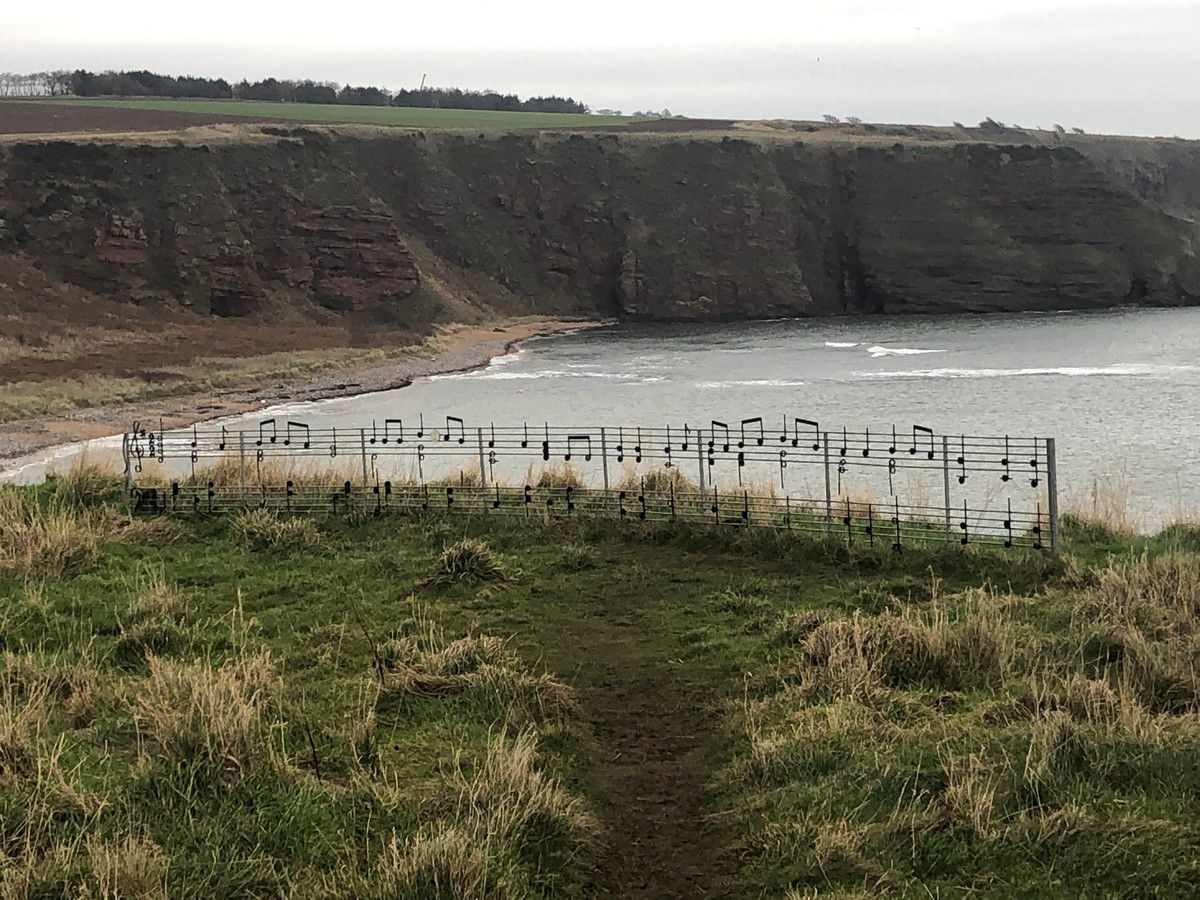 About a mile south of Auchmithie to the group’s left the path passes The Gaylet Pot, a very deep blow hole in the midst of a field. The opening to the hollow can be found some 120 feet above sea level in the farmer’s field. Measuring some 150 ft across, the ground falls away to reveal a deep channel which connects to the sea.

After circling round the Coastguard’s cottage on the approach to Auchmithie, the group were treated to a magnificent view of the derelict harbour and the Millennium Beacon, erected at the top of the cliff.

After lunch in the shelter of the harbour, everyone made the steep ascent to the right, via steps, enjoying the facilities at the excellent public loos in Auchmithie. It was a pity however that the highly recommended But ‘n’ Ben Restaurant was closed on this occasion.

The route then followed the path via Seahills back to the cliffs and the return journey back to Arbroath, which was a round trip of almost 12kms.

The next walk will be on Tuesday 1st February – Montrose Circular – meeting at Beach Splash Car Park or at the Burgh Buildings, Laurencekirk, leaving at 10am if using the Community Minibus. 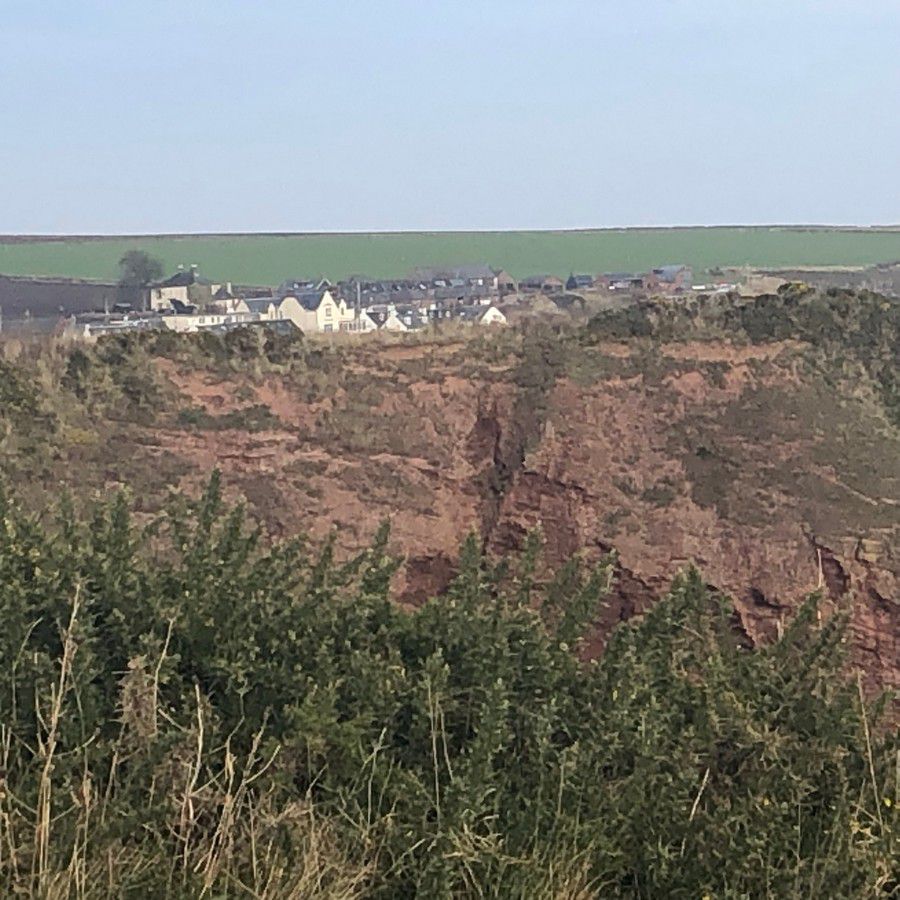